It all started years ago…

Two of my doctrinal Ph.D. proposal studies had been rejected. I had taken a two-week course in esophageal voice training with Dr. Nathaniel Levin at Miami University Medical Center, author of Voice and Speech Disorders: Medical Aspects. (Dr. Pressman had gotten two slots for me and my wife Marcia.)

At the close of the two-week course, everyone was required to write a paper on some topic to complete the program for certification. I had no topic in mind.

Dr. Levin said, “Write it up” so I did and then proposed a clinical study of vocal cord papillomatosis as a doctoral dissertation. Dr. Pressman assured me “papillomatosis was hopeless.” There were no cures by any medical intervention.

In 1923, Ullman had done a study on ten cases of papillomatosis. He found the condition was due to a virus. Ullman’s position became the prevailing medical view despite the medical findings of both Scott and Ferguson as well those of Paul Hollinger, who criticized Ullman’s study as flawed. I asked Dr. Pressman to help me fulfill the Ph.D. requirement for original research. “Okay,” he said. “Go ahead.”

I changed the pitch, tone focus, and breath support (all wrongly used) of these patients. Following three months of DVR three times per week, five out of the eight patients had a reduction or an elimination of the condition.

Dr. Pressman was unbelieving. He was aware that the faculty and staff of the Head and Neck Division had reviewed the vocal cord papillomatosis before and after. “It is an amazing finding,” Dr. Pressman told me. Dr. Pressman asked me to apply for a grant. “But chief, you said it was pointless.” Dr. Pressman sighed and waved me out of his office. “Do it.”

In 1971, that study was peer-reviewed and published in the Journal of Speech, Language and Hearing. It also involved the extraordinary concern of the President of the American Speech-Language-Hearing Association (ASHA) to undertake an investigation involving the success of the study.

A patient in that study sought me out 25 years later to thank me for my help in directing him to a normal voice by DVR and reported taht he had no papillomatosis since 1964. Years later, Paul (a chief salesman for a well known drug company) appeared on my public TV program Change Your Voice, Change Your Life. He reported that my program of DVR had resulted in full recovery (a cure) of his voice from papillomatosis of the vocal folds.

Paul had undergone surgical procedures on the vocal folds, but the growths were reoccurring. A five-year follow-up of his progress by DVR found him to be without further vocal fold problems. Paul’s voice was clear and normal, in stark contrast to the severe hoarseness and impaired ability to project his voice that he once had. His tired, inefficient voice was gone.

Another patient had the vocal cord papillomatosis surgically removed but the growths were returning. I worked with the patient. The growths regressed and disappeared. The ENT doctor commented “sensational.”

Another former patient diagnosed with Squamous Papilloma of the vocal cords writes:

To whom it may concern:

During the late 1970’s, I was diagnosed as having a squamous papilloma of the vocal cords. My speech was shot and for several years I had several surgeries all to no avail, talking caused pain and fatigue.

Eventually I saw Dr. Morton Cooper. I retrained my speaking through his coaching and repetition. Today occasionally when my voice becomes tired I go back to the old method and in a day or two I’m once again okay by practicing Dr. Cooper’s methods.

Ullmann reports papilloma of the larynx was caused by a filterable virus (1923). However, Ferguson and Scott write: “Ullmann’s series was small and poorly controlled, and his work has not been confirmed.” (1944, p.478)

The results of many investigations point to viruses as the causal factor of papilloma. The evidence was thoroughly reviewed, but it has not been possible to duplicate work previously reported on the presence of a species-specific virus capable of producing growth of tissue cultures with regrowth after blind serial tissue culture passes. (1968, p. 1468)

Regarding the influence of the endocrine system, Rubin (1954) and Baker (1965) note that papillomata in children may stop growing and may even disappear at puberty. Other authors, including Majoro, Parkhill, and Devine (1964) and Dekelboum (1965) do not find evidence to support this hormonal theory.

The theory of voice misuse and abuse is discussed by Webb:

Probably the earliest theory of etiology which still has its adherents is that expressed by Bosworth in 1892, and by Browne even earlier. They believed that papilloma of the larynx is the result of chronic irritation. Brown traced more than half of a series of 26 cases to overuse of the voice. More convincingly, in a series of 300 cases. Fauvel found the greatest incidence among those whose work required special or excessive use of the voice, such as ministers. (1956, p. 877)

Other authors who view chronic irritation or trauma as a possible etiological factor are Jackson (1960) and Dekelboum (1965) (adult papilloma). Voice abuse (such as shouting and competing with noise) is evident in the case histories of many patients seen by this author.

Ferguson and Scott report: “The vocal cords are the most frequent sites, but the tumors may occur anywhere in the larynx.” (1944, p. 478) They continue: “In children, the lesions are usually multiple, as opposed to the more frequently single adult form.”

These methods of treatment have had varying success. However, follow-up reports have not substantiated the early favorable results of these treatments. At the present, surgery, estradiol, vaccines, and ultrasound are the most frequently used treatments.

In treating 107 patients with juvenile laryngeal papillomatosis, Szpunar (1967) has had very good results in utilizing endoscopic removal and intralaryngeal injection of estradiol. Holinger, Schild, and Maurizi (1968) used as inactivated autogenous vaccine in 51 patients. Improvement was noted in 28 patients (55%), no change was observed in 13 patients (25%), 3 pateints (6%) deteriorated, and inadequate information was available in 7 pateints (14%).

Ultrasound is discussed by Holinger, Schild, and Maurizi:

Undoubtedly the most significant new modality has been the use of ultrasound for the treatment of laryngeal papilloma.… (1968, p. 1472)

As with x-radiation, a final evaluation may not be possible for another 20 years. The effect of the ultrasound on nerve tissues and on the growth factors of the larynx is not known, an important consideration that cannot be ignored. Radiation treatment for juvenile laryngeal papillomata has been found to be detrimental by Rabbett (1965) and Maier (1968).

Regarding the various types of treatment for laryngeal papillomatosis, Rosenbaum, Alavi, and Bryant report:

Some patients have undergone more than 100 procedures for removal of laryngeal papillomas. Many types of therapy, including steroids, sex hormones, Aureomycin, irradiation, and autogenous vaccines, have been employed. The long list of therapeutic agents indicates a lack of consistent results from any. (1968, p. 654)

Despite the many medical approaches to the treatment of laryngeal papillomatosis, the dictum of Holinger, Schild, and Maurizi remains: “Papilloma of the larynx continues to be an enigma.” (1968, p. 1462)

Since vocal fold irritation is one of the three major theories for the etiology of papillomatosis of the vocal folds, it is surprising that voice rehabilitation has not been a major means of treatment.

Voice rehabilitation for papillomatosis of the vocal folds has been attempted by Brodnitz (1963) and Cooper (1964, 1971a). Brodnitz found such therapy “helpful.” A study begun in 1964 and completed in 1965 by Cooper (1971a) found that five out of eight patients experiencing biopsied vocal fold papillomatosis revealed a reduction or a partial elimination of the condition following three months of voice rehabilitation.

A thorough discussion of these eight patients and comprehensive studies of the intensity, airflow rate, frequency, and quality (as well as an extended review of the literature) can be found in Cooper (1964).

The voice therapy for papillomatosis is the same as therapy for other organic growths. A discussion of therapy is also included in Cooper (1971a). One point regarding pitch needs to be emphasized. The habitual pitch level may be too high in some patients, although it is generally too low in most patients. A voice image usually exists in patients with papillomatosis.

Voice rehabilitation is not always considered applicable nor relevant by physicians for the containment, reduction, or elimination of this condition. Therefore, few patients are available for study and review.

A number of patients with papillomatosis made good to excellent progress in voice rehabilitation in that there was a slight to extensive degree of reduction in the size and/or number of papillomata. However, by using the general criteria established for determining the therapy results (Part V), it was necessary to evaluate most patients as fair in that a portion of the growth remained.

If the patients had remained in therapy for a longer period of time and had cooperated more fully in the program, it is believed that the final evaluation would have been good to excellent. Voice rehabilitation should be an integral part of treatment for vocal fold papillomatosis.

A clinical program of vocal rehabilitation for eight patients with biopsied papillomata of the vocal folds was undertaken for three months.

Although a review of the literature indicates that vocal abuse and irritation are possible etiological factors, as are virus infection and hormonal imbalance, the main methods of treatment for papillomatosis are medical, immunological, surgical, and physical.

This study revealed that the papillomata, which are pseudomalignant lesions, were reduced or eliminated in five of the eight patients through vocal rehabilitation. The medical faculty at UCLA Head and Neck Division checked the vocal fold growths before therapy and after therapy confirming the positive affects of Direct Voice Rehabilitation.

This study was a breakthrough, finding that Vocal Cord Papillomata is responsive to Direct Voice Rehabilitation. (Originally published in the Journal of Speech and Hearing Disorders, February 1971, Vol. 3, No. 1.)

Paul Lillyord (the former chief salesman for Genentech) appeared on my public TV program, Change Your Voice, Change Your Life reporting that my program of Direct Voice Rehabilitation had resulted in full recovery of his voice from papillomatosis of the vocal folds.

Mr. Lillyord had undergone surgical procedures on the vocal folds that the growths were reoccurring. A five-year follow up of his progress by Direct Voice Rehabilitation found him to be without further vocal fold problems. 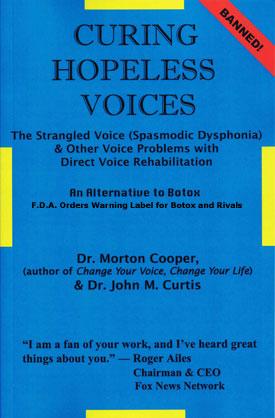 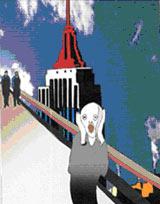